The Capsule360 from Miops is a versatile system that allows you to make motorized camera movements. The combination of one or more Capsule360 engines, together with a slider and accessories, make this a valuable total solution for every filmmaker. In the smartphone app, you'll find smart features for a variety of applications. The Capsule360 comes with a N3 cable. At the bottom of this page you will find an overview of the cameras for which this cable is suitable. In our assortment you will also find various other sets and separate cables for other cameras.

With a single Capsule360, you can move on a single axis. However, it is possible to expand the system with a second Capsule360. For example, you can make movements on two axes; pans on the horizontal axis and tilting on the vertical axis. Use the Miops L-bracket to connect two Capsule360 engines. It is also possible to use the Capsule360 engine(s) with a Capsule Slider. This allows you to make beautiful slideshots. Instead of a camera, you can also place the special turntable on the Capsule360. This allows you to take 360-degree product photos. The Capsule360 has a built-in battery, which can be used for about 8 hours. With the included micro-usb cable and socket charger, the Capsule360 can be charged.

The Capsule360 is indispensable for creative filmmakers. Because movements are computer-controlled, the end result is of an unprecedented high level. Whether it's a tight movement or extensive time-lapse recording, the result is always accurate and professional. At the bottom of the Capsule360 is a 3/8" thread for mounting on a tripod or Miops accessory. At the top there is a 1/4" thread for cameras or smartphone holders.

After downloading the iOS or Android app, the device is automatically recognized. The Capsule360 app understands whether you're using one or two motors, taking slideshots, or a combination of the two. Then select an option:

Tracking mode: your smartphone recognizes your face or a selected object. When you move to the edge of the image, your smartphone will automatically rotate. This keeps you in the picture at all times.

Turntable: Mount the turntable (see optional accessories) on the Capsule360. Place a product weighing up to 7 kg on the turntable and take a 360-degree shot with your camera.

Panorama: the camera creates a panorama in all directions. The photos are taken both 360 degrees round as well as up and down. From the app you can choose how much overlap the photos need to have in order to create a perfect 3D panorama.

Manual control: move your thumb from left to right on one of the buttons on the screen. The camera makes exactly the movement you want; pan, tilt and slide.

Star Tracking: Because the Earth never stops to take pictures of the stars, planets and galaxy, you're limited in maximum shutter speed. The Capsule360 can subtly move with the minute movement, so that stars are not displayed as stripes even at a slow shutter speed. This enables sharp timelapse movements of the Universe.

Focus stacking: take photos with the slider, with the sharpness shifting every time. This allows you to take extremely sharp pictures over the entire range of the picture.

Timelapse basis: Take an accelerated timelapse shot in which the camera moves slowly and smoothly from point A to point B, as you have chosen.

Timelapse slow shutter speed: Take an accelerated timelapse shot in which the camera shutter stays open for a while and the camera stops. This prevents camera shake.

Timelapse bulb ramping: take an accelerated timelapse shot with movement, taking into account a changing light. Useful for the transition from day to night. You can set different camera values for both the beginning and the end of the timelapse. The app ensures a smooth transition.

Timelapse interval ramping: make an accelerated timelapse recording with movement, where there is an acceleration or deceleration in the amount of time between two pictures. You can set other camera values for both the beginning and the end of the timelapse. The app ensures a smooth transition.

Timelapse HDR: take an accelerated timelapse shot with motion, taking three photos from each position (underexposed, normally exposed, overexposed), which can then be combined to form a timelapse video.

This product is suitable for the following cameras: 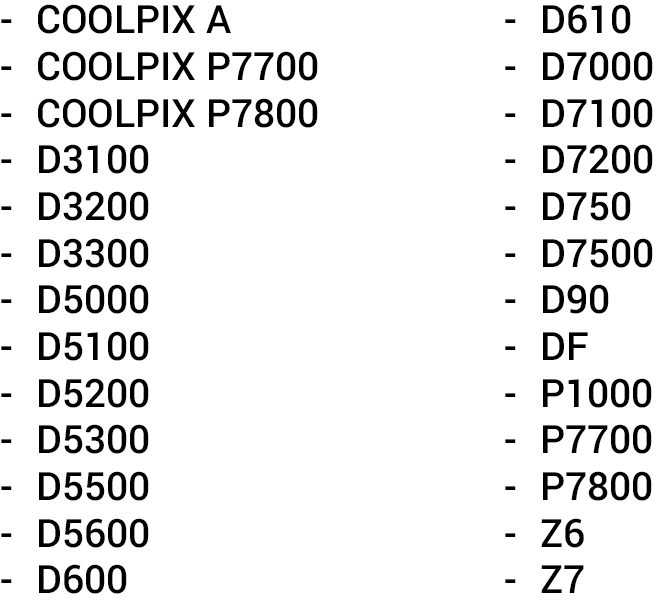 If you have another camera, please contact us for a suitable product.